Birds in This Story 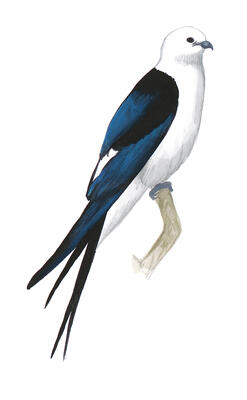 Bald Eagles face challenges due to habitat loss and other impacts. Help eagles in Florida by joining Audubon's Friends of Eagles program.

From late February through April, Floridians may notice the striking shapes of kites dipping and soaring through the skies. Not the toy kites you may see children flying on a windy afternoon, but an aerodynamic bird of prey, with a white head and body, slender, black wings, and a long, deeply forked tail. These are Swallow-tailed Kites, and right now they are on a long-distance flight.

In the spring, Swallow-tailed Kites return to Florida, where they nest and raise their young. Each March through June, these incredible fliers nest in large colonies with other Swallow-tailed Kites in tall pines and cypress trees across Florida and along the coast from Louisiana to South Carolina. The females lay 2-3 eggs and both parents help raise the young. In August and September, these magnificent birds of prey embark on their migration back to South America, where they spend the fall and winter. Their entire journey from North America to South America and back totals 10,000 miles!

Swallow-tailed kites were once found throughout the southeastern U.S., even being observed as far north as Minnesota, but vanished from much of their former range in the early 1900s. These adept and acrobatic fliers were listed as a vulnerable species in 2019 and have been at risk of habitat loss, with a range that was diminished from 21 states to just seven over the course of four decades. A majority of habitat loss for Swallow-tailed Kites has been the result of timber harvesting and agriculture. They appear to be rebounding, but they have not yet regained their former range. Expansive suburban sprawl has led to the increased presence of Red-tailed Hawks and Great Horned Owls, which do well in these settings and pose a threat to Swallow-tailed Kites. Because these kites are social and nest with others of the same species, possible range expansion is slow and challenging.

These birds of prey are protected under state laws and the Migratory Bird Treaty Act, which prohibits people from harming or removing them from the wild and protects their nests and eggs. However, humans’ indirect impact on these birds is a continual threat to the species.

Increased research efforts over the years, such as tracking using transmitter backpacks, have helped immensely in learning more about the magnificent Swallow-tailed Kite and how we can better protect them. If you find an injured Swallow-tailed Kite or a baby that has fallen from its nest, or any other imperiled wildlife, please contact a licensed wildlife rehabilitator for information on how to best assess the situation. And if you're anywhere near Central Florida, the Center for Birds of Prey should be your first call: call the clinic for instructions to drop off a bird at 407-644-0190.